If Saturday had felt like a high point for French triathlon, there was good reason. First, Vincent Luis delivered a brilliant WTS Hamburg silver in the men’s race, before 21-year-old Cassandre Beaugrand showed why she has been tipped for greatness with a first-ever WTS gold. By the end of Sunday, France was able to add Mixed Relay World Championship gold to their impressive haul, romping to victory by over 40 seconds from Australia, with USA home in third.

“We came here with the A team and everything worked out perfectly,” said Vincent Luis after his final leg sealed the win. “When everything works, you just gotta be happy. The atmosphere here was also great. We are all really looking forward to race the Mixed Relay in the Olympics, we never had a triathlon Olympic medal in France and now we have more chances.

As the crowds swelled and the sun shone down, the city was ready to see something special unfold, and it was Netherlands’ Rachel Klamer, undeterred by her accident the day before, who was out of the water and onto the bike ahead of Britain’s Vicky Holland and Kirsten Kasper of USA.

Japan’s Yuka Sato was also in the hunt as the riders found their rhythm, but it was Italy’s Angelica Olmo and home favourite Laura Lindemann who finished strongest, the German then seizing control of the 1.5km run to put Germany in a commanding position as she handed off to Jonas Schomburg just seconds ahead of France’s Leonie Periault.

Schomburg flew into the water and emerged from the swim with a narrow advantage, but behind him the dangerous trio of Johnny Brownlee (GBR), Ben Kanute (USA) and Dorian Coninx (FRA) were shoulder to shoulder. The four proceeded to set the pace on the bikes while Italy were penalised for a dismount line infringement.

Schomburg had over-exerted on the bike and found the run hard going, while Brownlee recovered well having struggled with transition to hold second, Japan’s Furuya, South Africa’s Richard Murray and Australia’s Aaron Royle all seizing an opportunity to make up ground on Ben Kanute. It was Coninx who dug deep, though, carving out a useful lead to give Cassandre Beaugrand another opportunity to shine in Hamburg.

And shine she did. With Jodie Stimpson starting 7 seconds back and Katie Zaferes 26 seconds off the lead, it was a trouble-free swim for the French starlet, and a useful window remained as she took to the bike with Zaferes and Stimpson potentially so strong together on two wheels, Japan’s Yuko Takahashi also well-placed. Further back, Australia’s Ashleigh Gentle and Germany’s Anja Knapp looked to begin their charge.

Indeed, the chasing three were able to close in on Beaugrand by the time they hit T2, but after all four came out together, it was time for another Zaferes/Beaugrand battle in Hamburg as they pressed for the advantage.

At the final handover, it was France, in the form of experienced campaigner Vincent Luis, who had a slender advantage over the USA, Britain’s Tom Bishop 10 seconds behind and all alone in third. Kevin McDowell (USA) delivered an excellent swim and left T2 alongside Luis, but once the Frenchman found his rhythm, he began to pull away.

Further back, Jacob Birtwhistle picked up where Ashleigh Gentle had left off and with the bit between his teeth, the Australian attacked hard to leave Japan’s Makoto Odakura behind and make inroads on Bishop, overtaking him with 2km still to go until T2.

Onto the run, Vincent Luis had a 30-second lead over McDowell and Birtwhistle was a further 30 seconds behind. With half a minute to make up over 1.5km, the Australian had more than bronze on his mind, however, streaking away from Bishop, gaining on McDowell and eventually catching him right down the chute to record an exceptional silver after France had secured their World title in style.

“We learned after Nottingham that is not over til it’s over and here it was true once again,” said Australia’s Aaron Royle. “We decided that we needed to get going, we made it and made it to the podium”.

“It was really hard yesterday when my coach made me pull out of the individual race,” added Ashleigh Gentle, “but it was for the benefit of the team and I think now it was worth it. We worked together really well as Team Australia and that paid off”.

“It was super tough,” said Katie Zaferes. “Everyone had super-competitive teams, and no one knew what was gonna happen until the very end.”

“I really like this event, and racing for a team, and here everybody races at another level of competition,” added Ben Kanute. “Here we had teams up front that nobody expected to see which is great, it makes for a really exciting race”. 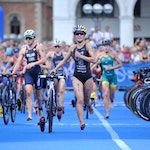 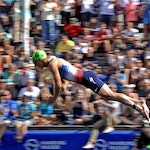 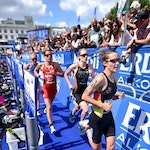 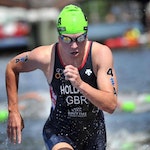 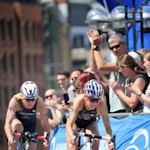 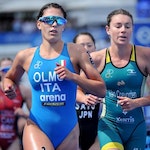 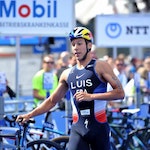 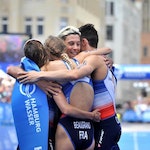 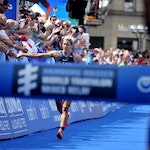 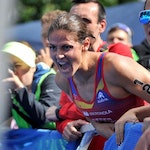 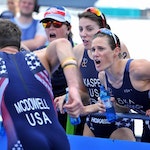 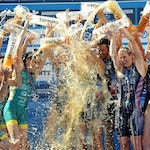