Norway is crowned in Andorra the champion of Winter Triathlon

The day started chilly and windy in Naturlandia, and with the course covered with sheets of ice that forced some changes and a small delay of the start of the competition, and with 12 teams aligned at the start of the 2021 World Triathlon Winter Mixed Relay Championships in Andorra. And once again, Team Norway proved that they have arrived to the sport in great shape, claiming the gold medals both in the Elite and the Junior Relays.

Current World Champion Sandra Mairhofer was the one in charge of leading the Italian team in the first leg of the Mixed Relay, and she put her team in the leading position, a place that they would not abandon until the last km of the race. She managed to stay in font during her first leg, ahead of the two teams representing the Russian Triathlon Federation and Norway.

When Guiseppe Lamastra (ITA) started his first leg -1.5km run, 3.2km bike and 2.25km ski- the lead with the Pavel Andreev was of only a few seconds, enough for the eight time World champion to catch up and do the ski leg all together. The just crowned world champion Hans Christian Tungensvik (NOR) was battling with Evguenii Uliashev (RTF), Robert Gehbauer (AUT) and Viorel Palici (ROU) to stay within close reach of the leaders.

Mairhofer was again leading on her second leg, comfortably ahead of the two teams representing the Russian Federation, with Elizabeth Sveum (NOR) on the chase for a spot on the podium, but also knowing that the second team from RTF will not be considered for the final classification, according to the World Triathlon rules that only one team per country can stay in the final classification in the Mixed Relay World Championships. She tagged her teammate for the final leg in the fourth place, but Norway never gave up and Tungensvik went full gas on his final leg.

The Norwegian managed to stay in fourth place during the run and bike, to then show a superb performance on the skis, passing all the teams lap by lap. Half way trough he was chasing Lamastra for the gold, to finish the last meters of the race smiling while his teammate waited in the finish line. Behind Team Norway, Italy secured the silver medal in the Relay, with Team RTF 1 finishing in third place. Team Austria claimed the fourth position, and Romania closed the top five.

In the Juniors Relay, it was a powerful display from team Norway, even though they knew well in advance that only one team from each country can be in the final qualifications. They had two teams competing, one with both Junior World Champions crowned yesterday, Sivert Ekroll and Julie Meinicke, and the second one with both silver medallists, Casper Ronning and Theresa Furstenberg, and both of them smashed the rest of the field, working together from the first laps to open a significant gap and then work together throughout the whole race.

It was only at the last lap of the final ski when Ekroll, only 16 years of age and already twice Junior world champion of winter triathlon, managed to pass his teammate to claim gold for Team Norway 1. “It was an all or nothing race for both teams”, explained the Norwegian coach after the race. “They knew that whoever will finish first will be in the podium, but the second team will not be considered in the results, so they fought extremely hard at the end, but managed to work together from the beginning. They are all really good skiers and runners, and Sivert is also competing in MTB races, so we are building a really strong team for the future of winter triathlon events”, he said.

Third on the finish line, but claiming the silver medal, was Team Russia with Anastasiia Nepomilueva and Yaroslav Kurilenok, and the last spot in the podium was for the young Spanish team of Irene Moro Betrian and Alvaro Lopez Lucia, who grabbed the first ever medal for Spain in the Mixed Relay winter championships. 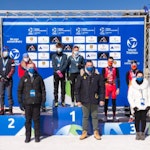 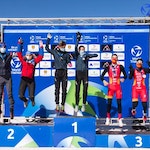 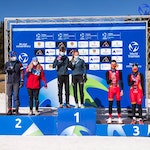 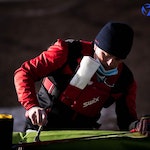 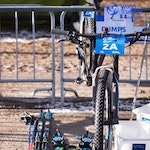 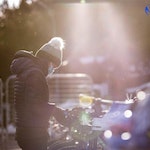 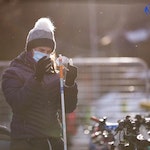 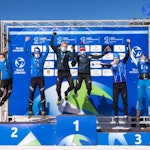 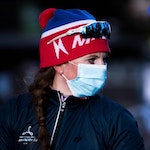 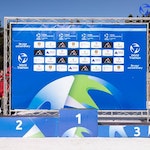 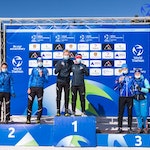