Phillip McCatty looks back on a second Commonwealth Games for Jamaica

Birmingham 2022 represented Phillip McCatty‘s second Commonwealth Games appearance for Jamaica, and he has witnessed a huge growth in the popularity of triathlon on the Caribbean island since he first took up the sport and put it in the spotlight back home. Now, the 37-year-old believes that the coming years will see even more Jamaican triathletes coming through and we may potentially even see a Team Jamaica Mixed Relay squad line up in 2026.

“Triathlon is exploding in Jamaica at the moment,” revealed McCatty after returning home from Europe. “There is overwhelming interest coming from schools and across the island in general. There are so many talented athletes and I believe this will become apparent in the coming years. I think that by 2026 we will have quite a few athletes jockeying for selection, both for the individual and relay events. Ultimately, it will depend on the number of spots available for Triathlon.”

“It was actually heart-breaking to have been the only Jamaican there. My female counterpart met the qualifying requirements, and while we were both busy preparing this spring, we were informed by the Olympic Association that Triathlon would be reduced from two spots to one. In the end, I was selected.”

Winning the national title in December last year secured McCatty his spot on the start line in Birmingham alongside some of the biggest names in the sport, but it was never a straightforward journey even after qualification with several hurdles in the way as athletes from smaller national federations often find.

“Our National Championships are typically held towards November or December, and the 2021 edition served as the qualifier for the 2022 Games. Official selection confirmation came about four weeks before the Games and the build-up, especially near the end, was challenging. There were significant administrative and logistical hurdles to overcome, many of which could have resulted in not making it to the start line. Overall preparation was a delicate balancing act because I also work full-time and there is zero flexibility in my schedule.”

Just as he had on the Gold Coast in 2018, Jamaica’s top male triathlete left the Games with not just good memories but plenty of key learnings from watching and competing against some of the best in the world, that he will add to his own racing as well as his fellow teammates and training partners back home.

“There are many performance-specific takeaways that my team and I can implement going forward. I’m already hungry to go again. I found the crowds much more electric in Birmingham. This was true both at the Opening Ceremony and the Triathlon, I presume that having a large Jamaican contingent based in the UK contributed to this. It is always an honour to represent Jamaica at an international level. There is something special about putting on the national colours and entering the field of play. These are invaluable experiences that will last a lifetime.” 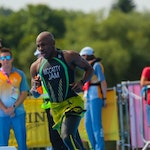