With a start list packed with usual names of the World Triathlon Series circuit, Frenchman Pierre Le Corre has claimed the victory at the 7th World Military Games held in Wuhan (China), while in the Women’s race the victory was for the Swiss triathlete Jolanda Annen.

In the men’s race, the victory was for Le Corre, a member of the French Army that has proven to be one of the most successful triathletes in the history of the Military Games, claiming in China his third consecutive gold medal, after winning in Mungyeong, Republic of Korea, in 2015, and in Rio de Janeiro, Brazil, four years earlier. The Frenchman, European Champion in 2018, finished in an impressive 1hr 42min 21sec at the Jiangxia District Liangzihu Lake Triathlon Venue in chilly conditions.

“It is definitely one of my best performances in the World Military Games,” said Le Corre after finishing. “The level of athletes is very high. They are top athletes, so it is really good to be with them.”

A mere slip of two seconds behind him in the finish line was Belgium’s Marten van Riel, who secured the silver medal with a time of 1:42:23. Four more seconds further adrift was another Frenchman, Dorian Coninx on 1:42:27, leaving Stefan Zachaeus, from Luxemburg, in the fourth place. The younger of the Polyanskiy brothers, Igor, gave Russia the 5th place, followed closely by his older brother Dmitry in 6th. The Hungarian member of the Army and also member of the ITU Executive Board Tamas Toth finished in the 7th place, with his team mate Gabor Faldum crossing the finish in 8th.

In the women’s race, the victory was for Jolanda Annen (SUI) storming home in the run leg to finish ahead of Russia’s Elena Danilova and long-term front-runner Vittoria Lopes from Brazil.

Annen finished the bike leg in the 15th place and at that stage was hoping for a ‘good result’. However 3km into the 10km run her expectations began to rise. “By that stage I was feeling good and thought ‘maybe I am a podium chance’,” she said after the race. “Then after three [of four] laps I started to think, ‘let’s go for the win’.”

Annen attributed her race-winning, fast finish to a lack of training. “My season had finished and I was resting,” she said. “I did no training for this. So the rest certainly helped”.

The fourth place was also for another Brazilian, proving that is one of the countries that has grown more in the last few months, with Luisa Duarte claiming the fourth place, and Beatriz Neres the 9th.

The 7thCWG also awarded top finishing teams by adding up the times of the best three runners of the day from each participating team. In the Men’s category, the Russian trio turned out to be fastest with an accumulation of five hours 13 minutes 30 seconds. Second was France on 5:15:39 and Brazil came in third on 5:16:31.

In the women’s team tally, Brazil finished atop the day’s pack of 10 participating teams by accumulating a winning time total of five hours 51 minutes nine seconds. Runners-up were the Russian women who combined to have clocked 10 seconds off on 5:51:19. Hosts China took the team bronze with a clocking of 5:52:01. 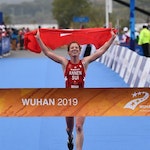